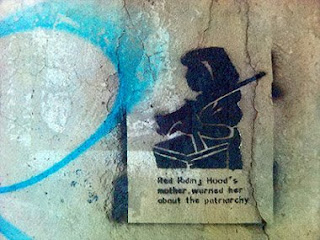 I know many people hear this and think it's a blatant oxymoron. Perhaps; but humor me for a moment and allow me a chance to present my case on the subject.

The suffrage movement (note that I did not say 'feminist movement') began as a way to acquire equal rights for women; the right to vote; the right to fair wages. Now years later the feminist movement has come along, still following the same basic concept of gaining equality, but with a few new twist. A few very deceiving and detrimental twists, because this is where abortion rights come into play.

Women began to think that if they were chained down with the burden of motherhood they would never be able to compete in this man's world. In all fairness, men don't have to deal with 9 months of pregnancy, hormones, mood swings, morning sickness. Further more they don't have to take a leave of absents after delivery while they breast feed, nurture and rear the child. Obviously, this is 'THE Man's' way of maternally shackling us to the stove, right?

So, what is the solution you fiery feminists, we ask. Simple. Eliminate the problem.

After we've 'eliminated the problem(s),' however many might rear their ugly pink plus signs over our 40+ year career, then what?

Now, will said gold watch be able to eliminate the years of guilt and anguish that MANY women feel following the act of abortion? Will it compensate for the lifetime lost to inexplicable anger rooted in these women's psyche from going against nature and terminating their unborn child(ren)? Will it unshackle those same chains of bondage that we were fighting so hard to escape from in the first place? Or are we just simple making the "choice" to pick which prison we'll spend our lives in bondage to?

I propose this, why settle for equality when we are designed to do something no man will ever be able to do? I say we stop worrying about glass ceilings, and demand they put us up on pedestals where we belong. Without our wombs not only will corporate America cease to exist but I'm pretty sure life on earth will as well.

It's time we stop striving for equality and start embracing our supremacy.

Doesn't anyone else find it a little odd that the feminist movement has us suppressing the one ability we have which makes us preeminent? Not very progressive.

Think of how we, as women, can change the world by create phenomenal beings, instilling in them amazing dreams and promises and then giving them their own chance to go out and change the world, all while creating more phenomenal beings, and so on and so on...it's a constantly growing ripple with endless potential and power...much more impressive than any watch, no matter how expensive.
Posted by Destiny at 10:58 PM

Labels: Move Beyond the Movement

You make my uterus tingle